I am back in Svalbard. The majestic mountains rise above the sea, my sense of perspective challenged each time I return, the glaciers climbing taller as I approach land and the ice cream thick curls of snow exquisitely untouched by anything we can see at a distance. It appears as though climate change has little effect as I punch my tail up and down through the cool water, powered by own motivations, unsure of what this day will reveal. But I know these surface shots are deceptive. There is a big melt coming by mid-century. 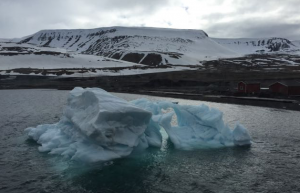 Last night I listened to a bunch of scientists. On a thought cruise I called it. Smart people, bringing their gaze closer in, empirically, on the damage to lichens, the effects of melt water, the accelerated change right here on Svalbard, a place where relatively few people visit but where a third of the worlds low orbiting satellite activity is monitored. I’m still trying to understand these layers of the material and digital landscape, the local and the global, the gradual migration north of other species and the volumes of data hoovered up and downloaded every second.

The sun is shining again and the water still, like ice. Placid. Primeval. But there is a deliberately massive machine intelligence at work too. And then some 16 or so cruise ships will sail into Longyearbyen and the hamburger bar will for an hour or two seem like a public abattoir of appetite and the long chain of grain-fed imported beef forgotten as the juices flow. The town suddenly a high rise of cabins! Not the Norwegian hytte dotting the shore, mind you, but sea views of a different kind. I’ll come back to these floating hotels another day. Today I need to talk about power. No, not my own nuclear restlessness, but other energy forms.

Svalbard is an international ‘treaty territory’. I think I made up another word. All the feeds coming through to my tusk produce these neologisms.

It’s a strategic location on the global map. Russia and Norway. Side by side. Dug in in earlier times. Following their seams. Coal, I mean. Well, actually their fitting together like seams of different cuts, and also in terms of their geo-political purchase on this remote archipelago. But there’s nothing seamless here. The coal mine at Baretensberg still chugging along, several museum sites now at Longyearbyen. The arcs of the Taubanesentralen reaching high above the town. The arc of the satellites higher still. The future a territory now. 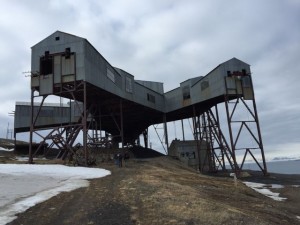