My atennna is working overtime this morning. I sense that the project team is in town! I am down in the water beside my old atomically powered ice-breaking relative The Lenin. That stalwart steel machine of movement now in the harbour of Murmansk for a facelift!

I turn up my frequency calibrator and tune in to what they are saying. I hear them talking about that they have different academic and design backgrounds and how they need to draw on these. They are keen to focus on the future.

‘But don’t forget its the cultural landscape, not just the tech or history, you know’, says the project leader. She is not so good in the mornings I’ve already learned, but by noon she’s a fireball of energy!

The talkative one is at it again. Telling how he has been thinking about the project and was telling his colleague and looked down and there was a drill bit. As if its the truth.

And then the others are laughing. ‘Really,’ he says, ‘I brought it with me.’

I can’t see quite what is happending. And then I hear one of them say, ‘Pass the fruit and the sugar,’ and I wonder what on earth this has to do with them planning their walkshop around the city.

‘I’ll send you the picture,’ says the tall one. And then I see it on my retinas. Haha. At breakfast in Murmansk! 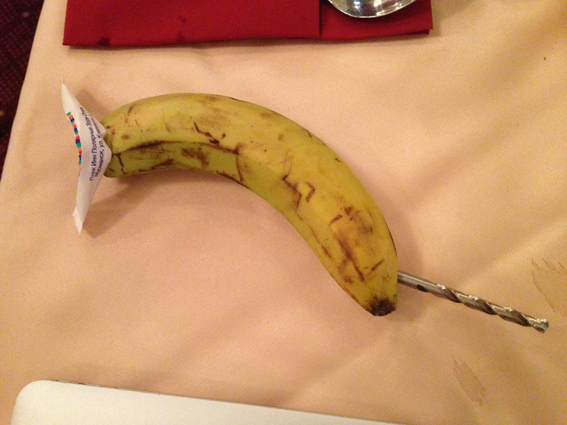 It’s a symbolic marker of the role of serendipity in the project, of humour and irony, of the found and the formed, they’ll say later.